LONDON, June 2, 2022 /PRNewswire/ -- Recorded nearly six decades ago by British actress, musician, and award winning illustrator Gillian Hills, the 1965 French pop hit "Zou Bisou Bisou" has resurfaced as a Tik Tok chart topper. Hills' recording has just surpassed the one million mark of individuals who have posted videos on the streaming service using that recording as the soundtrack. 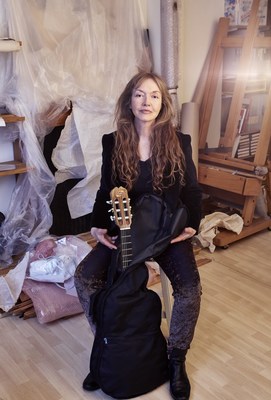 Virtually unknown to audiences outside of France, the recording was included in the music used for 2012 season of the TV hit series, Mad Men. From there, its popularity grew and both Madonna and Latin pop star Camila Cabello have since used it on Tik Tok  this year sending it viral.

Her status as a TOP 5 Tik Tok  artist comes after  a remarkable career driven by Hills' progressive vision of art, music, acting, and international culture.  At fifteen, she starred in the controversial teen drama  "Beat Girl," with some industry insiders calling her as the next Bridget Bardot.  After appearing in iconic films such as Antonioni's Blow Up, Stanley Kubrick's  A Clockwork Orange , she would later live in New York shifting her work to graphic illustration.

All her life, Hills has moved forward through her continual need to explore her artistic dreams. She returned to the recording studio in earnest in 2013 which resulted in Lili  her critically acclaimed album she was the first  Yé-Yé French pop star in the 1960s. Stream  Lili here: GILLIAN HILLS ALBUM: LILI

While making the album, recordings she made as a teenager in France re-surfaced in two landmark television series, the aforementioned "Zou Bisou Bisou" in  Mad Men and in 2020, "Tut Tut Tut Tut" in the Emmy award winning  Netflix series, The Queen's Gambit.

To coincide with the release of  Lili, Hills has issued her own four-part podcast entitled: Gillian Hills- A Life in Art, Film & Music.  The extensive audio documentary features intimate and revealing interviews between Hills and the film critic and broadcaster, Anna Smith. GILLIAN HILLS PODCAST: A LIFE IN ART, FILM & MUSIC  Hills also appeared on an extensive podcast that chronicled her work with the late director, Stanley Kubrick KUBRICK'S UNIVERSE