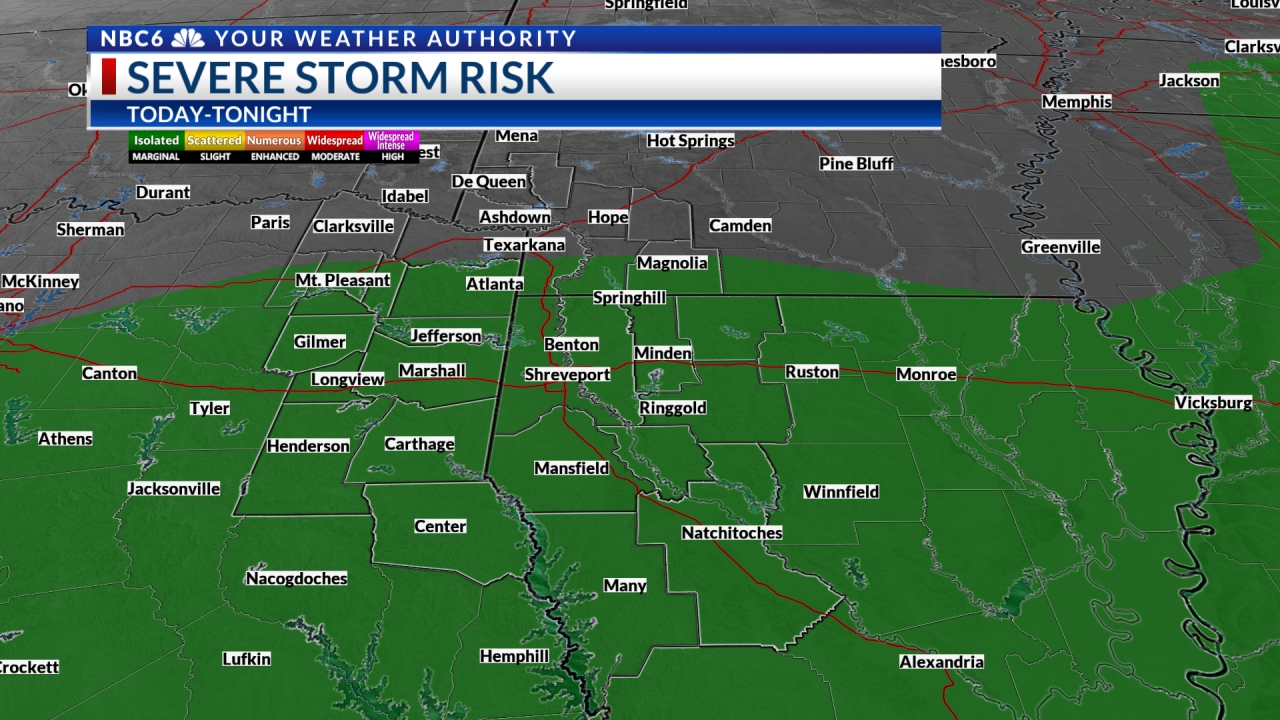 SHREVEPORT, La. (KTAL/KMSS) – A strong cold front will move into the ArkLaTex today, it will bring a chance of thunderstorms to some areas, and cooler weather everywhere in the upcoming days.

The front will take its sweet time moving in today, so most areas are going to have plenty of time to warm up before the front arrives. Expect highs to push 90 degrees across much of East Texas and Louisiana, but some areas of Arkansas and Oklahoma north of I-30 will wind up in the upper 70s and low 80s where the front will arrive before the noon hour. One thing to look out for today, it will turn breezy following the frontal passage. Winds will turn to the northwest at 15 miles per hour, with gusts to 25 to 30 miles per hour. This will occur early this afternoon in Texarkana, and by the late afternoon in Shreveport and other areas along I-20.

The cold front will bring some areas of light rain to the northern ArkLaTex from sunrise through noon. Once the front crosses over the I-30 corridor it will move into the warmer and humid air which will lead to scattered thunderstorms developing early this afternoon. These storms will eventually form a line that will move south across the remainder of the ArkLaTex during the afternoon and evening. While no severe weather is expected, these storms will bring gusty winds and frequent lightning. We should begin to clear out rapidly after sunset with rain ending in all areas by midnight.

Rainfall accumulations will be less than a quarter-inch in most areas, but if we manage to get a few strong storms going some areas could see between half an inch and 1 inch of rainfall. No flash flooding is expected.

This front will be remembered for the cooler air it will bring. Lows tonight will fall into the 50s and low 60s under clearing skies. High temperatures tomorrow will be in the upper 70s and low 80s with no humidity and sunny skies. This wonderful weather will be around Thursday and Friday as well.

The weekend will be warmer, but the mornings will remain cool with sunny afternoons and highs in the upper 80s. The dry weather will continue into early next week with highs returning to near 90 by next Monday.

SHREVEPORT, La. (KTAL/KMSS) - A very strong Pacific storm system will drive a cold front through the ArkLaTex today. There will be a threat of damaging wind gusts, large hail, and a few brief tornadoes. The severe weather window will open after sunrise and continue through this afternoon, with the worst of the weather likely between 9 a.m. and 2 p.m.

The Storm Prediction Center is highlighting the ArkLaTex for a 'marginal' and 'slight' risk of severe storms today. The threat for damaging wind gusts and a few tornadoes will be highest south of I-20 in the slight risk area where the ingredients for severe storms will be higher as a warm front will intersect the incoming cold front.

AAA: Be more aware on the roads as deer mating season begins

CHICOPEE, Mass. (WWLP) - As daylight saving time comes to an end, AAA is warning drivers to be on the lookout for deer.

According to AAA's crash data, a driver crashed into a deer once every two hours between October and December in 2020. Just over 1,400 crashes occurred during those months with the most occurring between 6 p.m. and 8 p.m. After the time change, most crashes were between 5 p.m. and 7 p.m.

Hundreds turn out for the Taste of Southern Hills expo

More than 70 businesses were represented, showcasing their products and services at The Southern Hills Business Association's Expo & Taste of Southern Hills. KTAL NBC 6 was a proud sponsor.

The spooky and dangerous side of black licorice

Each state's favorite Halloween candy, according to online shopping data