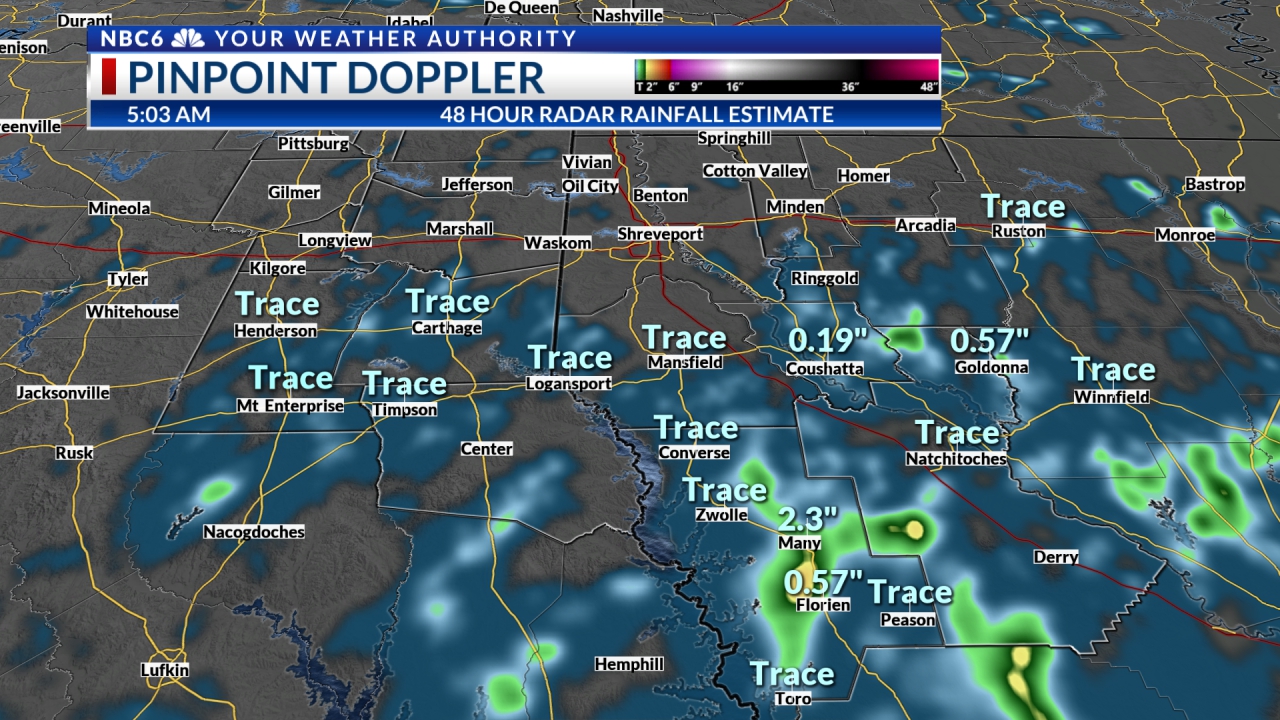 Tuesday was a mostly cloudy and warm day around the ArkLaTex. Temperatures began in the 60s this morning.  We have seen readings return to the low to middle 80s this afternoon.  Most of the area has been dry.  Most of the rain through Wednesday will stay well to our northwest.  It is possible that we could see enough sunshine Wednesday afternoon to allow temperatures over the southeast half of the area to soar into the mid to upper 80s.

Futurecast shows lots of clouds tonight and Wednesday with the best chance for the scattered shower over the northwest half of the area. As the main upper-level disturbance begins to approach from the west, we will see the showers and thunderstorms begin to spread more towards the southeast.  Look for the rain to increase over the NW half of the area Wednesday night and Thursday morning.  The rain will then shift to the southeast Thursday and Thursday night before ending Friday morning.

Models show that the higher rainfall totals will be over the northwest half of the area where one to two inches look promising.  The southeast half of the area will likely see totals of ½” to 1”.  Despite all of the rain, the threat of severe weather is looking rather low at this time.

We will dry out just in time for the weekend.  Most models do show plenty of sunshine this weekend with highs in the upper 70s to lower 80s.  Lows will dip back into the 50s.  We will have to keep an eye on Sunday.  It is possible that the upper low mentioned earlier will stall to our SW Friday and then move over the ArkLaTex Sunday.  If this happens, then some rain will be possible.

CLICK HERE to see the latest radar estimates of rain received during the past 24 hours.

WHITE OAK, Texas (KETK) - A convicted East Texas sex offender is accused of killing a man because he had been caught stealing $35 from the victim.

39-year-old Brandon Gilliam had been on the run from the Gregg County Sheriff's Office for 10 days before being captured last week. He had been the prime suspect in the murder of 66-year-old Steve McDowell on White Oak Road back on May 3.

East Texas man wanted for filming someone in an inappropriate manner

TITUS CO., Texas (KTAL/KSHV) -- Authorities are on the hunt for an East Texas man who is accused of recording someone in an exploitive way.

According to the Titus County Sheriff’s Office, 46-year-old Ramiro Estupinan Saucedo is currently wanted for the felony offense of Invasive Visual Recording. The charges stem from an alleged offense that occurred in Titus County around the middle of 2019.

DESOTO PARISH, La. (KTAL/KMSS) – DeSoto Parish Sheriff’s detectives are seeking information about a shooting in the early hours of Sunday.

According to the DPSO, they were notified of the shooting of a 22-year-old male that allegedly took place during a trail ride near White Springs Road on the north end of the DeSoto Parish line.

Many Police warn of scams targeting the elderly

LDH: Providers in all Louisiana parishes to receive COVID-19 vaccine this week

High-tech wristband reminds employees to wash hands, tracks how well they do it