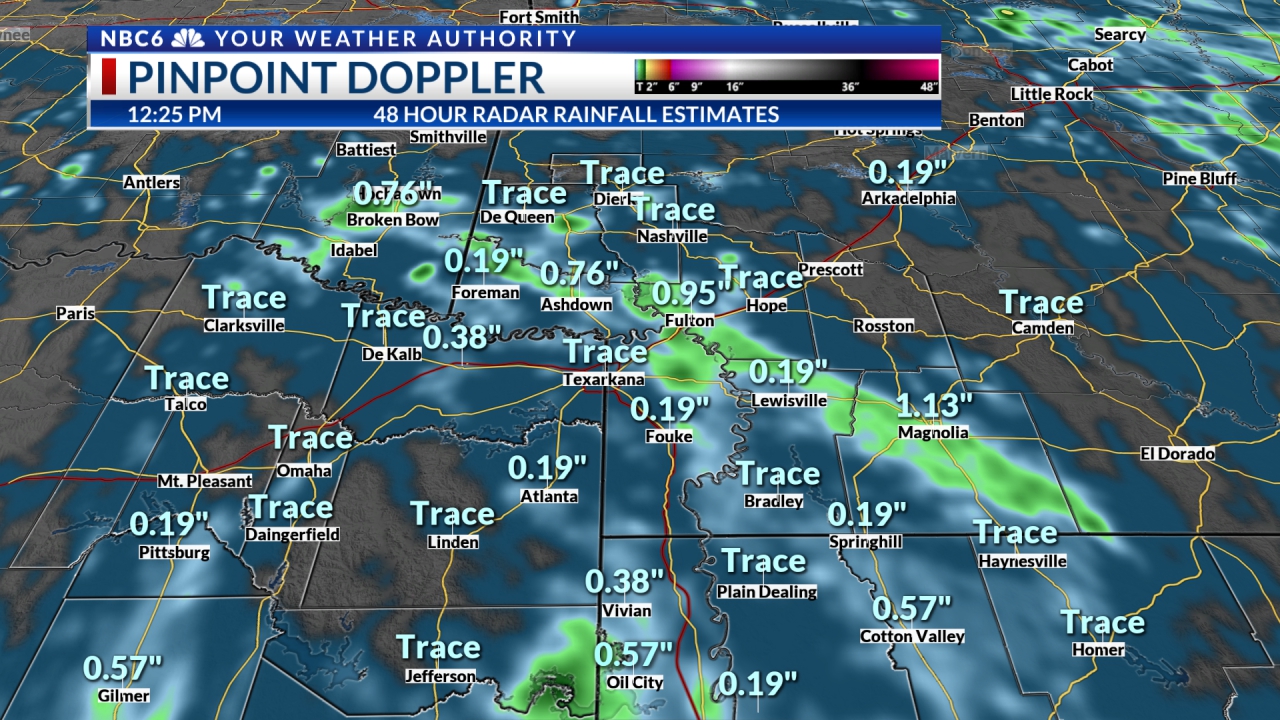 Scattered showers and thunderstorms will continue to move over the ArkLaTex through Friday.  Sunshine with warmer temperatures returns Saturday and could stick around through most of next week.

Wednesday has been another cloudy day around the ArkLaTex.  The day began with scattered showers. Temperatures have warmed through the 70s, with rain mainly concentrated over the northern half of the area. Futurecast indicates that we will continue to see scattered showers with a few thunderstorms Wednesday night and Thursday.  A few storms will be possible but severe weather is looking unlikely. Look for the scattered areas of rain to continue Thursday night.  The rain should begin to decrease Friday as it shifts to the southwest half of the area. It will finally come to an end Friday night.

While severe weather is not expected to be much of an issue in the coming days, there is still a chance for a few isolated reports of Flash Flooding.  The ArkLaTex will likely receive an additional one or so of rain with a few isolated totals that exceed two inches. As of right now, the heaviest rain should fall over the southern half of the area.  The flash flood risk will be highest in areas that have already received two to four inches this week. Fortunately, it appears that those areas over the northern part of the ArkLaTex will not receive as much rain. That means that if Futurecast is correct, the best chance for any flash flooding would be over the southern half of the area.

Now that most of the rain is behind us, it appears that we shouldn’t have any issues with the Red River flooding.  Most of the flooding will occur in the Sabine river basin.

Upper-level high pressure to our northeast will strengthen and move southwest towards our area by the weekend.  This will finally end the threat of rain and bring an extended period of dry and warmer weather.  Daytime highs over the next few days will be in the upper 70s and low 80s.  Once the rain ends, daytime temperatures will warm into the mid to upper 80s.  Our next chance for rain will likely hold off until the last half of next week.  Models are indicating that scattered showers and thunderstorms will return Thursday and continue into the Memorial Day weekend.

NEW ORLEANS (WGNO) — A day after the body of a 34-year-old New Orleans native was found in a wooded area in Russia, the mother of murdered Catherine Serou shared her final text messages with NPR on Sunday.

“In a car with a stranger. I hope I’m not being abducted,” texted the former Ben Franklin student and U.S. Marine to her mother, Beccy Serou of Vicksburg, Miss.

The Jerrari is half Jeep Wagoneer and half Ferrari 365 GT, and it’s for sale

(Motor Authority) - Performance SUVs are common today, but in the late 1960s there was only the Jerrari.

This unique combination of a 1969 Jeep Wagoneer and Ferrari 365 GT 2+2 was decades ahead of its time. Now the one-off SUV is for sale through Classic Driver Market.

SAN FRANCISCO (KRON) -- There's a new family on Sesame Street, and it's a unique one for the children's show.

Two gay dads, Frank and Dave, and their daughter, Mia, were introduced during the Family Day episode, which you can catch on YouTube or HBO Max. One of the dads was the brother of the character Nina.

LSP, DOTD on scene of 18-wheeler crash in Natchitoches

Who gets custody of the dog? Pets are property when it comes to divorce

Gov. Abbott signed more than 1K bills this session. Here are the 20 he vetoed.

COVID vaccine available this week to more than 1,400 Louisiana providers

What to know about child tax credits ahead of July 15th

American Airlines flights canceled: How to check your flight and re-book

Best Prime Day deals for under $100

LSP, DOTD on scene of 18-wheeler crash in Natchitoches