Don’t expect much sunshine in the week ahead.  Rain chances increase Wednesday through Thursday with a few thunderstorms possible.  Models are finally in pretty good agreement that much colder air will settle into the ArkLaTex late this week with winter precipitation possible.

Monday was a partly to mostly cloudy day around the ArkLaTex.  Morning clouds gave way to some sunshine over much of the area.  Temperatures stayed rather cool over the northern part of the area with highs in the 50s.  The rest of the area saw highs in the 60s.

Futurecast continues to indicate lots of clouds over all of the area for the foreseeable future.  We will see a slight chance for a few scattered showers Tuesday.  Rain chances will increase Wednesday as colder air begins to spill into the area. As the associated front moves through the region, a few thunderstorms will be possible but the risk for severe weather is looking rather low.   This rain will end from NW to SE Thursday night.  As of right now, it appears that we will dry out before getting cold enough to see a change to winter precipitation. 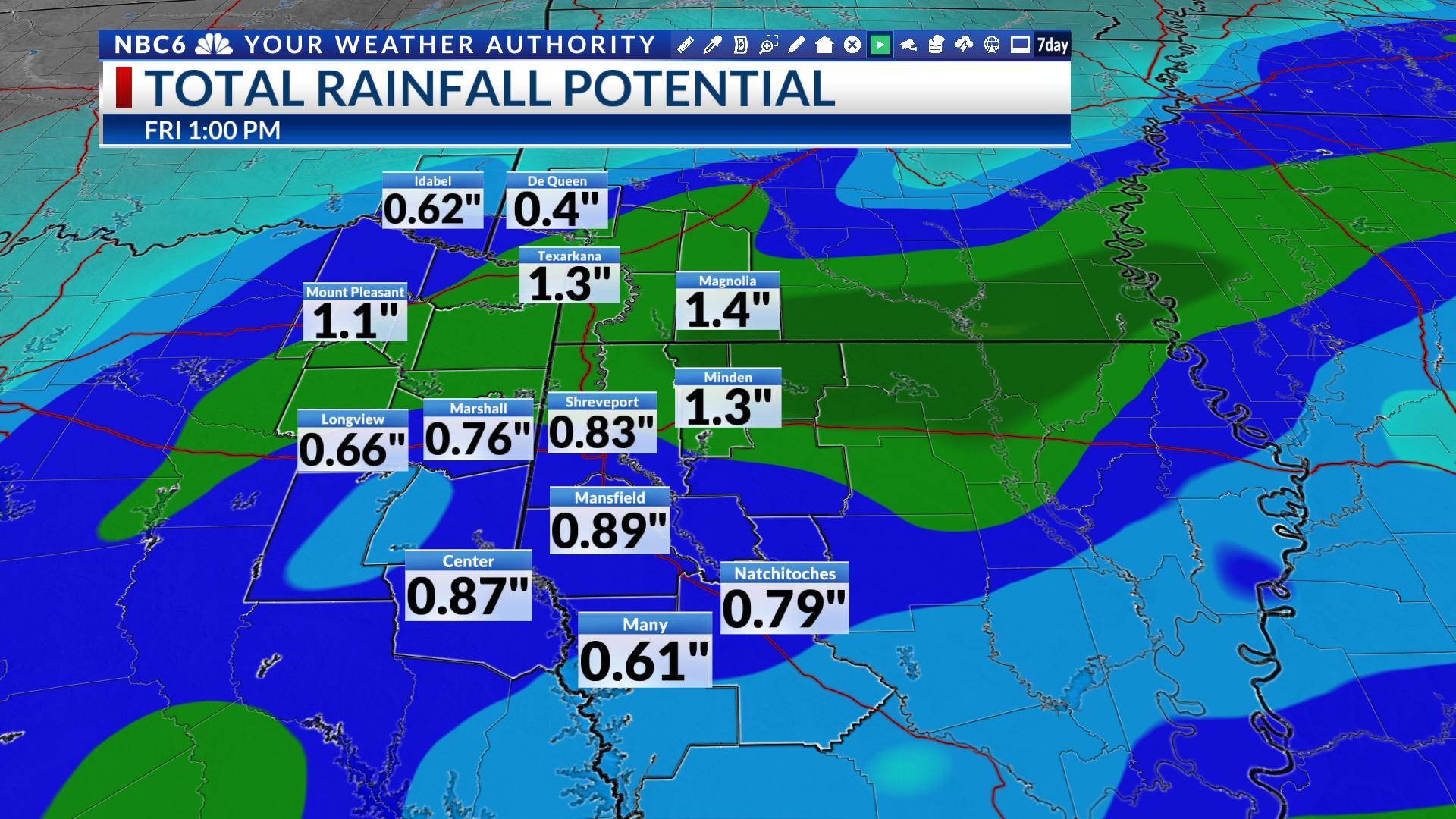 Models are finally in better agreement that a large arctic air mass will then settle into the area by the weekend. Overnight lows could dip into the upper teens to lower 20s by Sunday morning.  Daytime highs will mainly be in the 30s.  With this cold air in place, any disturbance that moves over the area could bring winter precipitation.  We will see a slight chance for a winter mix Saturday.  As of right now, it appears that our best chance of seeing some snow will be next Monday and Monday night.  We would then see a change to rain next Tuesday as temperatures begin to moderate.  Given how inconsistent models have been recently, it is pointless to offer an opinion on how much we could see, however, it does look promising that we will see some accumulation.

It does appear that we will see the warming trend continue through next week with daytime highs returning to near 60 degrees by the end of next week.  It also appears that we will continue to see above-normal rainfall during this time.  Stay Tuned!!

A strong disturbance will approach the ArkLaTex from the west Friday and will create thunderstorms that could become severe.  Futurecast shows the storms developing a little west of our area Friday afternoon.  This activity will strengthen as it moves across our area late Friday afternoon and especially Friday evening.  The severe weather threat will gradually end from west to east late Friday evening and Friday night.

Thunderstorms return to the ArkLaTex Friday afternoon with severe weather expected. We dry out and warm up this weekend.  A stronger disturbance could bring more severe weather by the middle of next week.

SHREVEPORT, La. (KTAL/KMSS) - We will enjoy a quiet and comfortable Thursday, before a warm front and cold front move across the region tomorrow bringing the threat of strong to severe thunderstorms Friday afternoon through Friday night.

Expect another cool morning today as temperatures will be in the low 40s before 9 a.m. We do have a few light rain showers north of I-30, but these look like they will fizzle out and we should be dry for the remainder of the day. Clouds will increase later this afternoon and into tonight.

Democrats still holding out hope for Medicaid expansion, even as budget amendment fails on House floor

NPSO: Pedestrian killed after being struck by car on highway in Campti

Earth Day was almost called something else entirely

Turtle crashes through windshield, hits 71-year-old in head; both OK